Check out Lance in the media and share on your social!

CHERRY HILL, New Jersey (WPVI) -- With little more than a blank canvas, 20-year-old Lance Bannister is painting a path forward for other adults like him with autism."Lance has been drawing since he could hold a pencil," said his mother, Amy Bannister. "Long before he's had speech."

That talent was taken up by Joe Smargisso, an art teacher at Haddon Heights High School. "This is probably one of the highlights of my career to be able to have the opportunity to work with a student who creates art purely for art's sake," said Smargisso.

Bannister is a student of the REACH program at Haddon Heights High School. Recently, he was awarded third place by the Penn Museum for his contributions in the Y.A.L.E. Tri-State Disability Art Show. His recent accomplishments were celebrated by the school, which prompted the idea to create his first solo art exhibit.

"We had realized that this body of work should really be seen and appreciated by people beyond our school community," said Smargisso.
Bannister, now an award-winning artist, is proud to display his work at the Camden County College Rohrer Center in Cherry Hill, New Jersey. Several dozen of his pieces, featuring collages, sketches, and paintings, will be adorning the walls until the end of the month.
It's an opportunity that Bannister's mom is thrilled about and hopes inspires more opportunities for adults with disabilities. "Especially autism but all disabilities, I mean, services really start drying up at 18," she said. "It's great that we have this opportunity to showcase that there is a life for kids past 18." 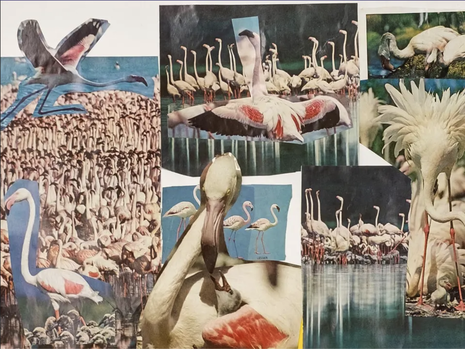 HADDON HEIGHTS, NJ — Lance Bannister, an award-winning artist from South Jersey who has autism, began drawing at an early age, according to his mother Amy. "He started by pausing his DVDs and taking twistable crayons and drawing on his flat screen television," she told Patch in a recent interview. "Eventually we got paper underneath there and and so he taught himself to draw by tracing. And then it just took off."

Before long, Lance was filling sketchbooks that his mother said she showed off proudly, as any parent would of any child's artwork. In time, educator Joe Smargisso of the REACH program at Haddon Heights High School — which seeks to place all special education students in classrooms with their general education peers — told Mrs. Bannister that her son had extraordinary abilities. "Joe said, 'You know, he's good, right? He has real talent.' And my husband and I said 'No, he just fills notebooks. We've been giving this artwork away for years.' And Joe said, 'No, there's something to be fostered here.'"

These days, Bannister most frequently creates art in one of two ways, his supporters said. In the first approach, he takes 30 to 60 seconds to draw a sketch of something on a piece of canvas, then turns it into a painting with a few or a variety of colors.

In the second approach, he takes magazines with lots of pictures and a pair of scissors and creates a collage of similarly-themed pictures. Examples of both his approaches can be seen above in the images and slide show that accompany this story.

Smargisso, who said he is an art college graduate, told Patch even he would have difficulty replicating Bannister's work. "Lance has this wonderful gift to depict things loosely and expressively that someone like Picasso took years to reverse his formal training to become," Smargisso said. "The beautiful thing about Lance's work, is that it's art for art's sake," he continued. "In other words, there's no concern for grades or trying to make any kind of impression. There's no ego involved. It's purely like drawing or painting for the pleasure of it."

Long-term, Bannister may do more for the South Jersey education community than create great art, said another REACH educator Jocqueline Renner. "We have a mission to look at every single one of our students and understand that there are so many gifts that they have to bring and not to see just a disability," she told Patch. "It's our job to make sure that we see those gifts ... There's just so much more than we need to learn and there's so much that we need to do."